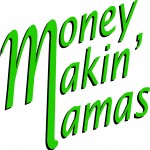 Not every cow makes you money!  Other than a pet or two, why would you keep a cow that costs you more to keep than see produces in revenue? 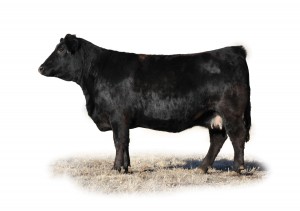 Profitable cows are especially important if the cows in question are producing the bulls you buy!  Genetics of both your cows and bulls are a big part of whether your calves make you money.  In the cattle business, profit isn’t everything but it is necessary if you’re to sustain the operation long term.  Since your cows have such a big impact on profit, they are critical to your success!

Money Makin’ Mamas start with the best genetics and breeds available, and then have to prove their worth in the real world—like the Flying H Genetics “Heifer Challenge”.  Just because she has the numbers and paperwork doesn’t mean she has the stuff to make a profitable cow.  Genetics and parentage is only part of the package so Flying H Genetics requires each female to “Prove” herself in a real world working ranch situation.  If she doesn’t pass the test, she is not allowed to pass her genetics along to any bull we sell.  Many of these cows become recipient cows for embryos from superior donor cows—good enough to raise a calf, not good enough to produce bulls for sale to our valued customers.

Our theme, Money Makin’ Mamas, was chosen for a reason, we expect our cows to work for a living.  Sure, they need to be managed and taken care of, but the more they work the less I have to.

And it starts at weaning.  How you develop your heifers can affect how they perform as a cow.  For instance, standing in the pen and eating from a feeder verses grazing corn stalks or winter graze can influence their grazing behavior. 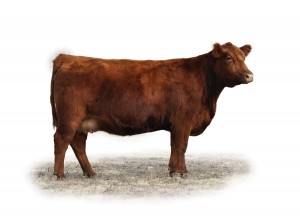 Several years ago, based on some initial research from the University of Nebraska, we changed our breeding weight targets and made our heifers rustle for their grub as much a mother nature allowed.  We found that supplementing protein and energy for only 1 pound of gain per day and forcing the heifers to forage for the rest, even with snow on the ground, helped train them to graze and assured they were structurally sound, athletic and “easy fleshing” or adapted to their environment.

Now, when we do our prebreeding exams, take yearling weights, body condition scores, ultrasound and DNA test; we make another cull based on how they have performed under this challenging environment.  The thin, rough haired, poor doing heifers are culled while the ones that did well are kept for breeding.

This heifer challenge has done three things: decreased our cost of production, identified and removed the heifers and their genetics that can’t handle our environment and it improved the rebreeding of our first calf cows by eliminating the poor doers before breeding the first time.

After the prebreeding exam, we do increase the heifer’s level of nutrition for a 2-3 pound gain through AI—approximately 60 days—and then turn out to pasture.

This process has lowered our heifer pregnancy rate by an average of 4% but has increased the pregnancy rate of our first calf heifers by 5% or more—a profitable trade-off.  We also save over $50 per head in feed costs, more than offsetting the lower pregnancy rate, and the cull heifers sell great and go to the feedlot where they belong.

We have learned that keeping more heifers as replacements, challenging them to fit the environment and culling the ones that don’t has improved the genetics and profitability of our cowherd.