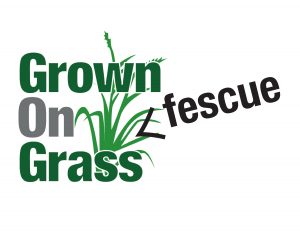 Many have heard or experienced the horror stories of cattle grazing fescue – rough hair coats in the heat of summer, lameness, loss of hooves and tail switches, and decreased conception rates. It’s a story Dick Helms, owner and operator of Flying H Genetics of Arapahoe, Nebraska, heard often when selling bulls in the fescue belt.

“We talked to people as we were delivering bulls, I was shocked at how many breeders told me they bought yearling bulls and some would die the first year,” Helms says. “If you take a bull that’s fat and black coming out of the feedlot and put him on fescue, it’s asking him to do an unbelievable task, and some of them just can’t do that.”

Many prevent these problems by calving in the fall to avoid breeding during peak endophyte toxicity, diluting toxic endophyte with red clover, supplementation, and recently, renovating pasture with novel endophyte or endophyte-free fescue. As University of Missouri professor and state extension forage specialist Rob Kallenbach notes, “We’ve known for a long time that some animals handle fescue better than others.”

In the last few years, the University of Missouri has researched the possibility of identifying genetic markers in cattle associated with tolerance to fescue toxicity. However, Kallenbach adds, “It’s been really difficult over time to be able to say a certain bull or heifer has what we need in our herds to be tolerant to ergovaline.”

– Adapting to the fescue environment –
Many Missouri farmers have done it through natural selection. “Sometimes when an animal had fescue foot, we sold. Sometimes when animals weaned light calves, we sold. With some level of selection pressure, we have eliminated the most sensitive animals because they’ve eliminated themselves,” Kallenbach says. “Where we’ve brought in stock from other areas, particularly bulls that weren’t tested on fescue, we’ve also introduced susceptible genes into the herd. It’s been one step forward two steps back in fescue for the last several years.”

For years, Helms had been selecting bulls and heifers adapted to the Nebraska environment by grazing corn stalks and ruling out thinner cattle and those with rougher coats. “Rather than feeding all heifers on a higher plane of nutrition so they gain more, our goal is to identify the heifers that breed early and are fertile so they can go out and breed and rebreed. I can put them out on cornstalks and they’ll do just fine,” he says. “We have a lot less open two year olds because we’ve identified cattle that struggle in that environment and eliminated them.”

The same thing applies to Missouri. To adapt bulls and heifers to the fescue environment they were being marketed in, Helms established a production and marketing center in Lowry City in 2008, where he sells about 300 bulls a year and sells females on a private treaty basis. At that time, he created the ‘Grown on Grass’ and ‘Roughage N’ Ready’ programs to help customers identify bulls and heifers raised on and adapted to their environment.

By raising them on fescue year-round, providing supplement only as needed, bulls and heifers that aren’t suited to the environment can usually be identified within two to three months. “We eliminate 10% to 15% of the bulls that just can’t handle that environment,” Helms says. “We can identify heifers that don’t put on flesh as easily, are higher maintenance, or maybe have poor eating habits. Whether on fescue or stalks, cattle need to be able to sustain themselves on the feed resources available with minimal supplementation. Some do it well and others don’t.”

– Another layer of selection pressure –
The idea, Helms says, is to develop bulls and heifers that gain in their environment without a lot of supplementation, by use of natural selection. “If you have a cow herd that is grown and raised on fescue, and they aren’t supplemented heavily so they actually have to graze and tolerate fescue, those cattle will have a higher probability of calves that will handle it also,” he says. “That selection pressure over time should develop a herd that is tolerant to endophyte, but it has to be done without a lot of supplementation.”

Kallenbach notes these animals that are tolerant will handle fescue better, but are not resistant. “If we take animals that have tolerance and those with susceptibility and put them in the same herd, and have them out on fescue, those that are tolerant will do a little better than those that are susceptible, wean calves that are 25 to 50 pounds heavier, produce stocker calves that gain two to three pounds more per day on fescue,” Kallenbach says. “But if we put them both on non-endophyte and novel endophyte fescue, they’ll both perform the same.” 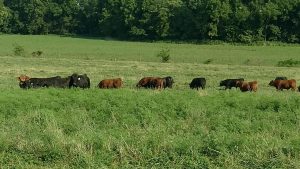