For over 30 years, Flying H Genetics has guaranteed calving ease on every bull we sell.

It’s quite simple, no one buys dead calves. So, you don’t want to buy a bull that causes calving difficulty and we don’t want to sell you one. Flying H Genetics utilizes every tool available to identify and eliminate hard calving bulls and guarantees every bull we sell to not cause above normal calving difficulty due to genetics. Things like breech births and abnormal presentations   create calving problems but are not caused by genetics.

Flying H Genetics also identifies and guarantees some bulls for use on virgin heifers. Bulls not identified as 3, 4 or 5 star Heifer Bulls are not guaranteed for use on heifers.

Even though there are 15 things that affect calving difficulty 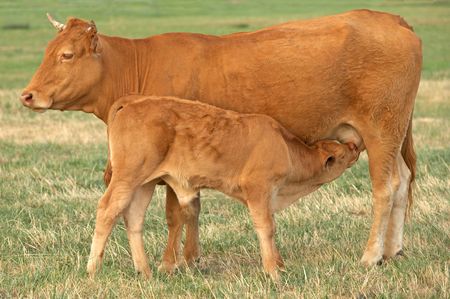 , birth weight or calf size is the most common cause. Today, the best way to select for acceptable calving ease is to utilize the Calving Ease EPD. This EPD is better to use than either the Birth Weight EPD or the Actual Birth Weight because it utilizes actual calving data in calculating its ratio. At Flying H Genetics we also incorporate visual appraisal and environmental influences in our analysis.

Remember, there are two components to calf birth weights—genetic and environmental.

If you want guaranteed calving ease on every bull you buy, Flying H Genetics is your partner for profits.